[Infographic] How did Reshoring and 3rd Party Logistics Operations fare in 2016?

Third-party logistics operations (3PLs) saw additional gains and enhancements throughout 2016, as predicted earlier in the year. The level of visibility across entire supply chains grew as collaboration became the new normal. Reshoring was set to become a major trend as well, but at the close of the year, actual reshoring and nearshoring efforts did not surpass most logistics trends. Meanwhile, expanding the level of services offered by 3PLs stood out as the leading logistics trend throughout the year. But, taking on the challenges of 2017 will require executives in supply chain operations, specifically logistics operations, to consider what happened in each of these areas.

There was a time when working with competitors was tantamount to industrial espionage. However, that age has been replaced as analytics capabilities, and Big Data sharing enabled cross-company optimization and refinement of processes. According to Jeff Berman of Logistics Management magazine, 91 percent of shippers saw positive results, ranging from increased revenue to lower overhead, following the implementation of business partnerships and collaborative efforts. Additionally, 93 percent of 3PLs identified collaboration as reducing overall logistics costs, reflecting a positive, 5-percent shift in opinion since 2012.

By September, shipping giant, Penske, partnering with Capegimini Consulting, forecasted a return to higher growth among logistics providers due to increased collaboration. But, a larger number of intermodal shipments were also crucial in the push toward more collaboration and sharing of data among logistics providers in 2016. Amazon also played a role in this trend throughout the year. Since Amazon brought excellent to mid-sized businesses together in one arena, reports Patrick Burnson of Supply Chain 24/7, prices were driven below expectations, increasing the demand for better logistics operations. This need was only achievable through collaboration.

Bringing more jobs back to America was spotlighted in the 2016 presidential election. As explained by Apple Rubber, more than 2.4 million manufacturing jobs traveled overseas to China between 2001 and 2013, not counting millions of other jobs outsourced overseas through the close of the 20th century and spurring the demand for change in the political conversation. While U.S. domestic output reached nearly $6 trillion, Americans still felt the stings left from the Great Recession, catalyzing a reshoring movement that only grew stronger. Although the trend was most noted during the campaigns, manufacturers were already looking at how its benefits could outweigh its investment costs.

Manufacturers are also changing their target markets. In 2013, 30 percent manufacturers were focused on serving the needs of China, but 20 percent replaced that in 2016, reports Barry Matherly of Inbound Logistics. In other words, the need to move production and shipping costs back to America was strong, and it will save companies money too. There remain challenges to large-scale reshoring, such as higher material costs in domestic production and transport, explains Reginald Tucker of FC News. However, manufacturers’ resolve appears unwavering as more companies face social and potential legal backlash for continuing offshoring of jobs.

One of the most interesting things to watch in 2016 was the number of 3PLs expanding traditional services to create more well-rounded service levels. Cerasis took on the challenges expressed in our predictions directly. The Cerasis Envoy, our newest API, which replaced traditional electronic data interchange (EDI), within the Cerasis Rater, connected carriers’ APIs in a cohesive dashboarding tool. Also, Cerasis broke free from less-than-truckload constraints to open the door to a host of small parcel operations, including packaging, auditing, and better customer service levels.

The changes in service levels were also seen across the industry. Per Penske Logistics, 19 percent of shippers explored consultancy opportunities, and 17 percent started paying greater attention to expanding their IT service capabilities. Consumers and business-to-business partners also powered this trend as up to 62 percent of 3PL customers favored intermodal shipments or changing typical modes used. In fact, look at a few of the other results from the Annual Study on the State of Logistics Outsourcing, which highlights the changing degrees of service levels. 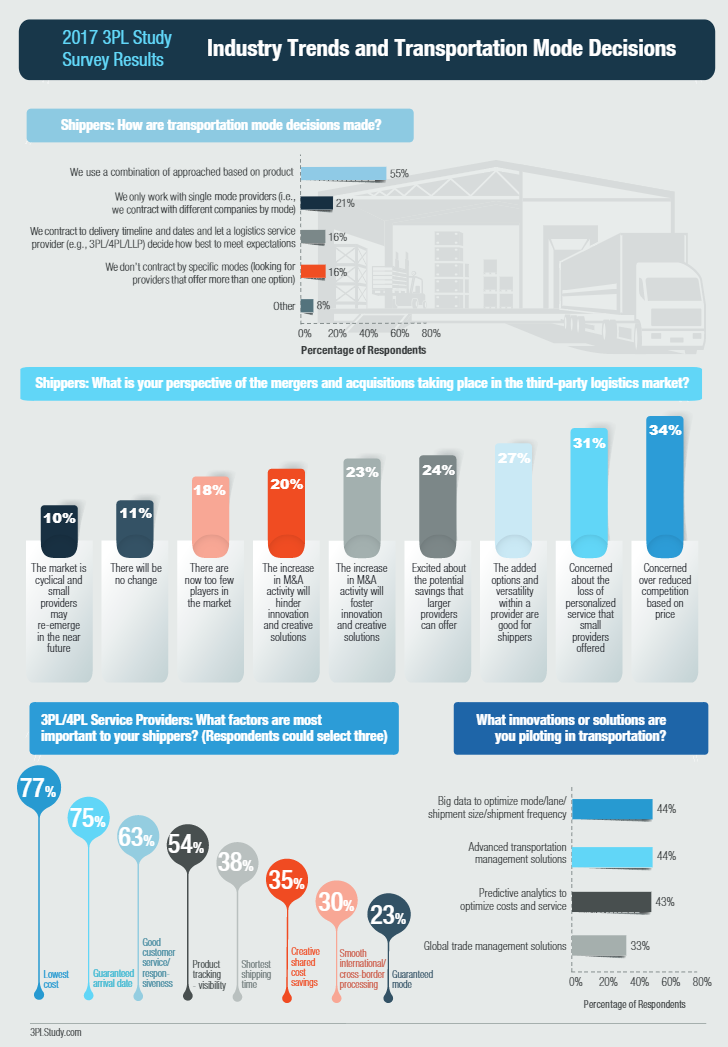 Shippers and logistics providers stand on the cusp of breakthroughs in how products move around the globe and the U.S. Rather than relying on traditional practices, more companies are turning to 3PLs to embrace the next wave of omnichannel sales, and demand on U.S. shippers will only climb from here. In 2017, we will see some genuine innovations and setbacks as companies prepare to answer to the Trump Administration, but the overwhelming view of the state of logistics is coming into alignment with American ideals and demands for a better tomorrow. Ultimately, our predictions were closer than ever, and we look forward to what 2017 might bring the industry.