It is that time of year again. The 28th Annual Council of Supply Chain Management Professionals (CSCMP) 2017 State of Logistics Report, published by A.T. Kearney, is out. In the years since the Great Recession, the report has shown growth throughout logistics and a recovery through measurement of logistics spending as a percentage of U.S. gross domestic product (GDP). However, this year’s report comes on the heel of a polarizing election and inauguration, so its findings may come as a surprise to shippers.

U.S. logistics costs fell last year for the first time since 2009, reflecting concern within the industry. But, the most-concerning factor in the 2017 State of Logistics Report revolves around truckload expenses. Truckload expenses make up the largest line-item within the report’s cost categories, as seen in this breakdown. 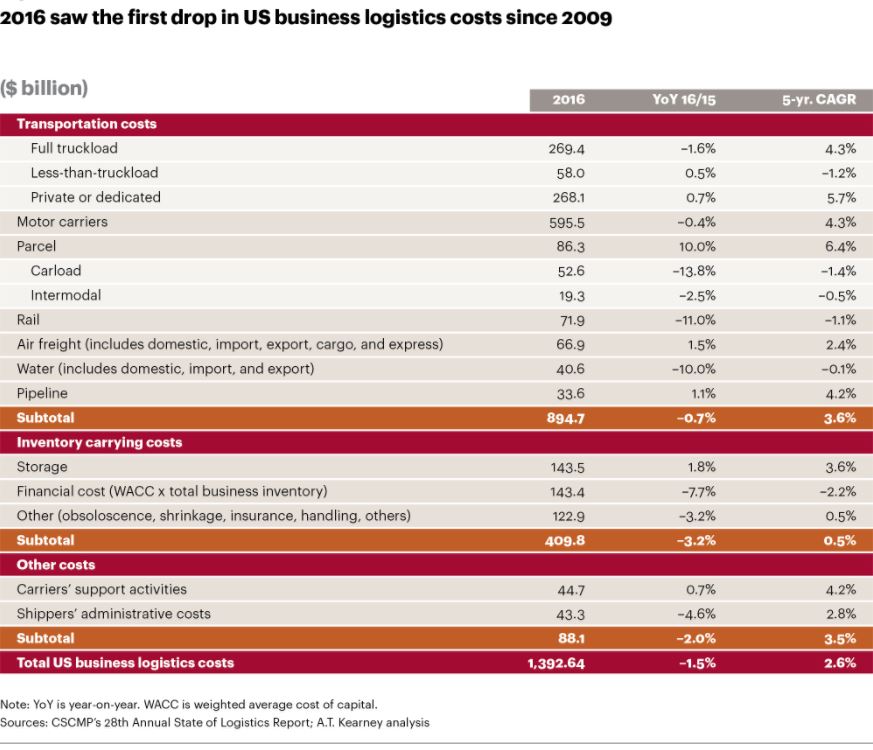 Unfortunately, the continued decrease of truckload expenses by 1.6-percent annually, explains William B. Cassidy of the Journal of Commerce, indicates that carriers cannot continue to scrap by with minimal profit margins. As a result, truckload expenditures will increase toward the end of 2017, and the increase could be sharp and sudden.

Overall Over-the-Road Shipping May Suffer From Being “Too Proactive.”

Supply chain costs have been quite low for the past few years. Lower fuel costs, better economic stability and continued growth of e-commerce have given rise to reduced shipping costs. However, the decrease in overall over-the-road shipping costs fell even further last year to 7.5 percent of U.S. GDP. Consequently, further losses would result in losses to carrier profits and difficulty keeping rates at their historic lows. The current measure of logistics as part of U.S. GDP is at its lowest level since 2010, as seen in this graphic. 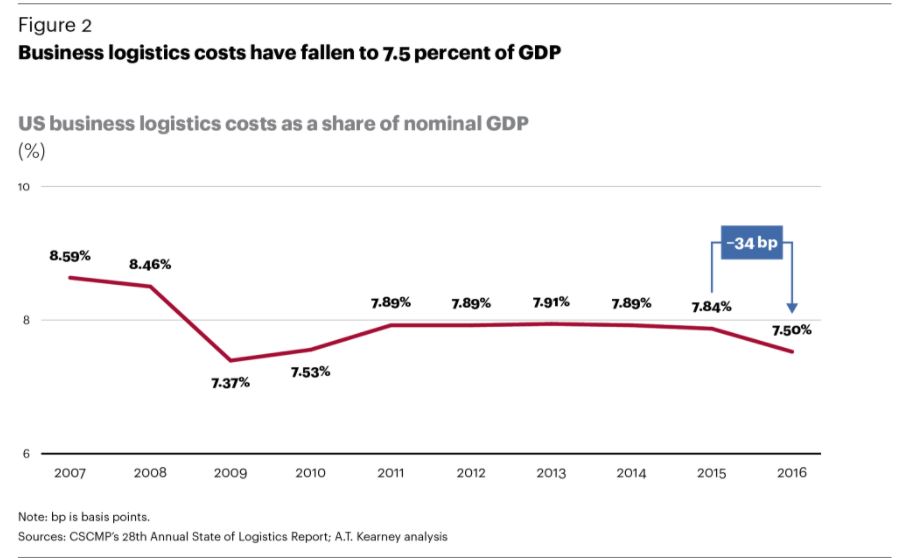 Carriers may also be partly to blame for this issue. There has been a trend of increasing fleet size in response to a “capacity crunch,” yet the number of unused Class 8 trucks increased 53 percent last year. While more trucks are great, not having drivers to get them going and the financial drain are contributing to carriers’ need for more shipments.

Spending on LTL Shipping Is Increasing.

Despite the fears noted in the 2017 State of Logistics Report, some areas of the transportation industry are growing at excellent rates. Spending on LTL shipping has risen by 0.5 percent, valued at $58 billion today. This increase is due to moderate rate increases by carriers seeking approval to charge higher rates to shippers. Unfortunately, this gain is accompanied by a 1.6-percent decline in spending on full truckload (FT) shipping, alluding to a possible break-even scenario.

Spending on private and dedicated fleets jumped significantly this year, rising 0.7 percent to a value of $286.1 million. This is nearly equal to the amount shippers spend on over-the-road truckload shipments in a year. As a result, more shippers and carriers will start looking to tap into the resources of private, dedicated fleets, offering incentives for dedicated fleet-owners to work with carriers directly. Furthermore, parcel and small-package shipping has now eclipsed rail as the second-largest mode of transportation, increasing 10 percent to $86.3 billion in the U.S.

Freight Fragmentation and Spread Are Causing Issues in Carrier Networks.

One of the confounding factors in this year’s Report has to do with increasing variety and volume due to e-commerce sales. Incoming shipments are being rerouted to other ports and terminals. This forces carriers to rethink their networks, routes and means of getting products from the docks to consumer doors.

The Impact of Trump Administration on Logistics Is Uncertain.

The Trump Administration also played a role in this year’s Report. The plans laid out during the campaign spelled success for the industry, but to date, the administration’s actions have left many feeling uncertain and unsure if they will succeed. New policies could force shippers to adapt to new trade regulations and markets, but protests and legal battles in both the courts and legislature could lead to even bigger, costlier regulations.

Over-the-road carriers are also faced with uncertainty this year. Rail providers have managed to squeeze every drop of efficiency from their network and implement stringent, disciplined pricing practices. However, the sudden drop in overall freight spend via over-the-road modes will lead to a greater resolve for consolidation and rationalization of changes in spend. In other words, motor-carriers will be forced to tackle their inefficiencies and potential problems with innovative technologies, and when necessary, push shipping costs upward.

A Word of Caution to Taking the 2017 State of Logistics Report to the Bank.

Uncertainty following the election and actions of the Trump Administration, a global shift toward better inventory-control systems and the use of predictive analytics could be undermining the State of Logistics Report.

On one hand, the Trump Administration could put the proverbial fire to the feet of carriers and shippers to bring about amazing growth, or not. The push toward analytics-based systems might be decreasing freight spend as inventory control and forecasting grows more accurate, reports Mark Solomon of Supply Chain Quarterly, or not. The pushback from those upset with the election results could result in a new onslaught of regulations that could choke the transportation industry, or not.

Uncertainty and unsustainability are the best words to describe the 2017 State of Logistics Report, so in the interim, it is the best interest of the industry to continue marching forward with strategic, money-saving goals, including upgrading systems, implementing strong TMS platforms and working together to ensure their continued success.